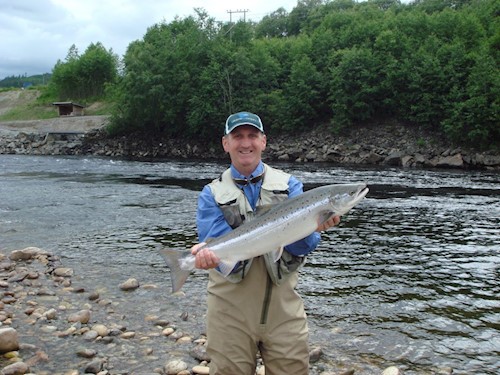 People have a variety of reasons for changing their career path in life. These can be financial, family reasons, or just simply for job satisfaction. For Malcolm Anderson, it was to follow his passion for fly-fishing. Malcolm’s career path took him from the world of flying to the world of fly tying. Malcolm worked as a helicopter engineer for over thirty years. He then gave up his day job to focus all his time and efforts on the Caledonia Fly Company. Quite a career change, I am sure you will agree.
Malcolm first picked up a rod, far away from these shores. To be more precise, it was over three thousand miles away in Penticton, British Columbia (BC). Malcolm lived in BC as a boy and regularly went fishing with his father from the age of five. Father and son would go fishing and from time to time bring back something tasty for dinner. It was at this early age that Malcolm developed a keen interest in fishing, but it was not until the family moved back to Scotland that Malcolm’s real obsession started.
At the age of twelve, Malcolm joined the River Allan Fishing Club in Dunblane. He fished on the River Allan for both trout and salmon. Soon after this, Malcolm was invited to join the Bridge of Allan 76 Club. He now had access to fishing on six lochs and a mile of the River Dochart. Soon Malcolm started going fishing with many of his fellow members. They were keen to take him under their wing, being a new member. They taught him some of the finer points of fly-fishing and also passed on a wealth of knowledge and experience. Malcolm was like a sponge absorbing all the useful hints and tips. Malcolm started gaining a reputation within the club as being an experienced angler and soon fellow members would be asking him for advice.
With experience, Malcolm’s confidence grew. Malcolm started to compete in the Club Championships and then on a bigger stage at the National Championships. Being very competitive, Malcolm was constantly trying to get an edge over his fellow competitors. He would often be looking through his fly box for that killer pattern and not be quite satisfied with his choice. Being very creative, Malcolm realised that there was only one thing for it, he would have to start designing and tying his own flies. After all, how hard could it be for a man who modified helicopters for a living?
Malcolm first started tying flies in 1979. He got some good advice and guidance from his fellow club members and was soon creating many weird and wonderful creations. Malcolm found tying flies quite addictive and got immense satisfaction when one of his creations fooled a fish. By using his fly creations, Malcolm became more successful in the competition world and developed a growing reputation. He was Scottish Stillwater champion, but his biggest achievement was when he captained Scotland and won the coveted Brown Bowl (top international rod) at the Lake of Menteith.
Malcolm’s fly tying soon began to get noticed. He was asked by a well know tackle company to design a fly for them. Malcolm got paid in fishing tackle for this, which was ideal for him. Around a year later Malcolm was asked to join a company called “Caledonia Fly Company”. Malcolm quickly became the chief product designer and director. Within two years, Malcolm bought his fellow directors stake in the company. Malcolm and his wife Karen became the proud owners of the Caledonia Fly Company.
For the next few years, Malcolm had very little spare time. His time was divided between his day job, focusing on his business and also competing on the national competition circuit. However in 2002 Malcolm realised that he could not do it all. He decided that life was getting too hectic to have two jobs and to hold a presence in the competition world. After thirty-three years, Malcolm gave up his day job as well as competition fishing to concentrate fully on his business. This allowed him more time to follow his passion of dry fly fishing for salmon and trout. On reflection, Malcolm feels that this is the best career move he has ever made.
After turning his attention solely to the company, Malcolm thought that being in the tackle trade would mean that he would get more time to indulge in his passion. However, this is not the case, but Malcolm still manages the odd cast. Malcolm has spent many years chasing salmon all over Scotland, from the Thurso to the Tweed. Living in beautiful Perthshire, Malcolm is surrounded by fantastic salmon rivers and regularly fishes the River Tay. Malcolm finds being on the river the most relaxing part of life these days.
To many anglers it would be a dream to have your own fly company. The choice of fly patterns at your disposal would be mind-boggling. You would probably spend more time trying to choose a fly rather than fishing. Malcolm however has a simple philosophy when it comes to choosing a fly. Malcolm feels that when you choose a fly, any fly, all you need is confidence. The most consistent fly in Malcolm’s fly box is the gold-bodied Willie Gunn. 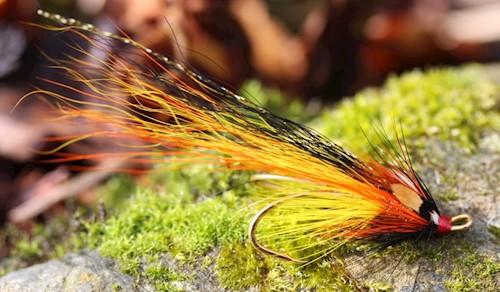 Malcolm is very passionate about the conservation of wild salmon and sea trout stocks. He like many of us feel that Scotland is a dream destination for all the worlds’ anglers and we need to keep it like that for ourselves and our visitors, so our sport can continue long after we have caught our last salmon. This is a sentiment that should be echoed by all anglers in Scotland.
Malcolm has had quite a remarkable career transformation. It has allowed him to follow his passion. This was a passion that was ignited all those years ago as a five year old boy, over three thousand miles away in British Columbia.
The Caledonia Fly Company is a small family company based in Perthshire, Scotland. Malcolm still uses all the experience and knowledge that he gained during his time in the angling club and competed in national competitions, when he designs his innovative fly patterns. Malcolm and Karen are passionate about their superb product and put many hours into ensuring that their customers have one of the finest commercially tied products in the world. The Caledonia Fly Company is now seen as one of Europe’s leaders in innovation and quality.

The Caledonia Fly Company produce fantastic looking flies of the highest standards that are not just eye catching but durable and long lasting. For more information visit www.caledoniaflies.co.uk